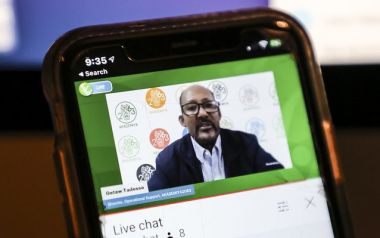 African agricultural trade has yet to reach its potential, despite progress over the last decade. The continent continues to face issues including the lack of regional integration, inadequate infrastructure, and high trading costs—all recently exacerbated by COVID-19 restrictions and lockdowns. However, the Jan. 1 implementation of the Africa Continental Free Trade Agreement (AfCFTA) offers unprecedented opportunities for the region.

A Sept. 24 online policy seminar focused on current and future prospects for intra-African trade and other trends as outlined in the 2021 Africa Agriculture Trade Monitor (AATM) report by AKADEMIYA2063 and IFPRI.

The purpose of AfCFTA—thus far signed by 54 countries and ratified by 38—is to “create a single market for goods and services in the region to accelerate intra-African agricultural trade and boost [the continent’s] agricultural trade participation in the global market,” said Getaw Tadesse, Director of Operational Support at AKADEMIYA2063, noting the trade deal’s potential to open economic opportunities for the African population.

The costs in formal trade should be reduced by incentivizing traders to use formal cross-border channels, which would also improve the quality of trade statistics. To do this, “international coordination of trade policies is needed more than ever,” said Abdoulaye Seck, Professor of Economics at Université Cheikh Anta Diop in Senegal.

One problem many African countries face as their economies evolve is higher tariffs on processed goods. Tariffs rise sharply on goods that are even minimally processed—for example on chocolate compared to cocoa. As it is implemented, AfCFTA should be able to address such tariff as well as non-tariff barriers, said AKADEMIYA2063 Associate Scientist Leysa Sall.

An important chapter in Africa’s trade history is the Arab Maghreb Union (AMU), established in 1989, a free trade zone including Algeria, Libya, Mauritania, Morocco, and Tunisia. However, the AMU failed to meet its objectives, said Leila Baghdadi, a Professor of Economics at the University of Tunis, due to the absence of a common vision, lack of regional integration, and poor infrastructure. This history offers important lessons for AfCFTA implementation, Baghdadi said.

Africa has the least amount of regional integration in the world. “In terms of intra-African trade, 70% of Europe’s trade is with Europe, 60% of Asia’s with Asia, 50% for the Americas, while Africa stands at 22%; all of which is international trade,” said World Trade Organization Senior Counsellor Doaa Abdel Motaal. Food is a relatively small portion of this picture, she noted, and the cost of trade in Africa is highest in the world.

Africa requires investment for regional integration, to enable reductions in trade and non-trade barriers, to improve its infrastructure, and in R&D, Abdel Motaal added. “The best way to attract investment is by demonstrating that Africa is a good global player … and a safe place to put money and time into,” she said.

“Political will will be necessary … to illustrate that there’s an ability to actually trade with one another and to ensure there is a free flow of goods,” said Johann Kirsten, Director of the Bureau for Economic Research (BER) at Stellenbosch University, South Africa.

Boosting intra-African agricultural trade requires several things, explained Chahir Zaki, Associate Professor of Economics at Cairo University: Timely and accurate data; annual assessments of AfCFTA’s performance in promoting intra-African trade and lowering tariffs; and digitalization, such as the automation of customs to speed up clearance of perishable agricultural goods. Following these recommendations, he said, will help make African trade competitive at both regional and global levels.