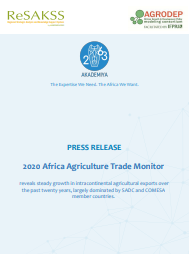 KIGALI, 11 September 2020 – The third annual report of the Africa Agriculture Trade Monitor (AATM), presented during the AGRF Virtual Summit on September 10, finds that African exports are expanding into emerging and fast-growing countries. Agricultural exports in Africa showed an upward trend between 2003 and 2018, as well as a diversification of export destinations, with exports increasing to Brazil, Russia, India, China, and other Asian countries, including Saudi Arabia, Viet Nam, United Arab Emirates, Turkey, Malaysia, and Pakistan. This diversification has resulted in a progressive decrease in the EU’s share as a top destination for African exports, from 45 percent in 2005–2007 to 36 percent in 2016–2018.

The report reveals that there is room for expanding intra-African trade by further opening countries to extraregional trade flows. While, intracontinental agricultural exports have steadily grown over the past two decades, growth is largely dominated by SADC and COMESA member countries and trade occurs predominantly within regional economic communities (RECs). On average, SADC and COMESA retained 84 percent and 66 percent of their intra-Africa exports within their respective regions in 2016–2018. Intracontinental trade flows are responding well to emerging trends in domestic food demand.

According to the findings, export shares of emerging cash products and processed food products are expanding, while the shares of more traditional export products are contracting. Among food products, increased export shares for maize and wheat are observed over time, but especially for processed foods such as soups, broths, and food preparations, reflecting growth in processed food consumption, along with demographic shifts, growing urban food demand, and changing lifestyles and habits in rural areas. Other products traded intraregionally include rice, cattle, apples, vegetables, sweeteners and fats, beverages, and traditional nonfood products such as tea, coffee, palm oil, cotton, and tobacco. Another major finding of this 2020 AATM is that export diversification away from primary commodities is key to trade expansion in Africa, as exemplified by the case study of the Southern Africa region. A few products, such as maize, dominate intra–SADC agricultural trade, but there is potential for intensifying intraregional trade by building on comparative advantages. Intra-African trade, particularly in agriculture, is much larger than official statistics alone suggest. For instance, estimates show that informal cross-border trade in staple foods accounts for about 30 percent of total trade in West Africa. While there are some initiatives which attempt to estimate the gap between reported trade and total trade that is due to informal trade, there is currently no continentwide system for monitoring and quantifying informal cross-border trade in Africa. In terms of challenges, lack of competitiveness and nontariff measures constrain Africa’s global trade potential.

The report finds that Africa performs relatively better in agricultural production than in agricultural exports. The region accounts for 10.2 percent of the world’s agricultural GDP, but only 2.7 percent of global GDP and 4.2 percent of global agricultural exports. This reflects Africa’s lower labor productivity, lack of competitiveness in world markets, inefficiency of customs procedures and the prevalence of nontariff barriers affecting the continent’s exports. Nontariff measures faced by African countries range from sanitary and phytosanitary measures to conformity assessment and domestic support to the main producers of agricultural products. «Over the last 2 decades, African countries have managed to increase exports going to emerging and fast-growing economies, while steadily expanding intra-trade over the past two decades. This indicates that progress towards the goals of the African Continental Free Trade Area (AfCFTA) is possible but the pace will need to be accelerated and sustained by removing the the many domestic administrative and regulatory barriers impeding intra-African trade» says Ousmane Badiane, Executive Chairperson, AKADEMIYA2063.

Among African countries, nontariff measures remain the main obstacle to raising the continent’s trade competitiveness and improving Africa’s trade integration. As reported in the 2019 AATM, customs formalities as well as regulatory and administrative barriers which raise the cost of trading are major impediments to the expansion of African agricultural trade, along with insufficient transport and communication infrastructure as well as inefficient credit and insurance markets. “The ratification of the African Continental Free Trade Area, and more recently the establishment of trade corridors to facilitate the flow of goods during the COVID-19 pandemic, underscore that African countries have the political will and the ability to reduce trade barriers and improve trade flows,” said Jo Swinnen, director general of the International Food Policy Research Institute (IFPRI). « As this report highlights, adopting policies that seize this progress and promote further expansion of trade can boost economic growth and resilience to both local and global shocks. » The limited complementarity or overlap between the commodity composition of African imports and exports suggests a limited scope for intra-trade expansion through trade diversion. In other words, African countries will not be able to sensibly increase intracontinental trade by simply substituting products supplied by other African countries for those currently sourced from their partners outside of the continent. Findings show that the average agricultural trade complementarity index is 10 percent in Africa, meaning that 10 percent of one country’s import schedule overlaps with another country’s export portfolio, on average.

The Africa Agriculture Trade Monitor 2020 is the result of a collaborative initiative between the International Food Policy Research Institute (IFPRI) and AKADEMIYA2063. It builds on the work of the Regional Strategic Analysis and Knowledge Support System (ReSAKSS) and the African Growth and Development Policy Modelling Consortium (AGRODEP) on trade, both facilitated by IFPRI and AKADEMIYA2063 as part of their work in support of the Comprehensive Africa Agriculture Development Programme.

Download a free copy of the 2020 Africa Agriculture Trade Monitor

FOR MORE INFORMATION OR TO REQUEST AN INTERVIEW, CONTACT:

AKADEMIYA2063 is an international non-profit organization, headquartered in Kigali, Rwanda with a regional office in Dakar, Senegal. It builds on the rich experience of long standing support to the African Union’s Comprehensive Africa Agriculture Development Programme (CAADP) with data analytics and knowledge products to facilitate evidence-based policy planning and implementation. It plays the role of a major science contributor to the Agenda 2063. AKADEMIYA2063 is the home of: The Regional Strategic Analysis and Knowledge Support System (ReSAKSS): Established in 2006 under the Comprehensive Africa Agriculture Development Programme (CAADP), ReSAKSS supports efforts to promote evidence- and outcome-based policy planning and implementation. In particular, ReSAKSS provides data and related analytical and knowledge products to facilitate CAADP benchmarking, review, and mutual learning processes. The African Growth and Development Policy Modeling Consortium (AGRODEP): which aims to position African experts as leaders in the study of strategic development issues in Africa and the broader agricultural growth and policy debate. AGRODEP facilitates use of economic modeling tools, promotes access to data sources, provides training and research grants, and supports collaboration between African and international researchers. Visit : www.akademiya2063.org

The International Food Policy Research Institute (IFPRI) seeks sustainable solutions for ending hunger and poverty. IFPRI was established in 1975 to identify and analyze alternative national and international strategies and policies for meeting the food needs of the developing world, with particular emphasis on low-income countries and on the poorer groups in those countries.  IFPRI is a partner of AKADEMIYA2063 and a close collaborator on ReSAKSS and AGRODEP activities.