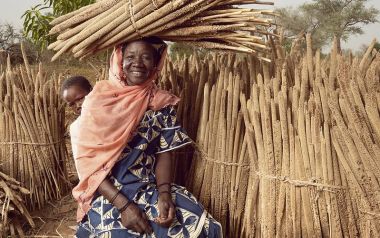 Second in a series of blog posts on the release of the 2019 Annual Trends and Outlook Report (ATOR) at the ReSAKSS Annual Conference in Lomé, Togo, Nov. 11-13. This year’s ATOR theme is “Gender Equality in Rural Africa: From Commitments to Outcomes.” Read the first post here and the third here.

A new wave of gender-related land reforms has swept across Africa south of the Sahara in recent years. These reforms have incorporated innovative approaches to land administration, including legal provisions protecting women’s land rights, and efforts to minimize gender inequalities concerning land, housing, and property rights. In 2003, for instance, the African Union (AU) adopted the Protocol on the Rights of Women in Africa, focusing on human, social, economic, and political rights - widely referred to as 'the Maputo Protocol. In 2015, the AU Specialized Technical Committee on Agriculture and Rural Development, Water, and Environment adopted a recommendation aimed at facilitating women’s economic empowerment: That member states move toward allocation of 30% of land to women through legislative and other mechanisms. Various countries have also taken measures such as the explicit recognition of women’s equal rights and the prohibition of gender-based discrimination; promotion of joint ownership and registration of land; and laws on inheritance and property rights for widows and children.

Despite these encouraging moves, however, women’s land rights in Africa remain in a dire situation for two main reasons, explored in chapter 4 of the 2019 ATOR.

The void in gender equity in regulatory reforms

First, though the recent wave of land reforms has made significant strides in the formal recognition of customary rights, most of these changes have not achieved traction when it comes to maintaining gender equity in land governance and protecting of women’s land rights. Results from a World Bank Land Governance Assessment Framework (LGAF)-based diagnostic analysis reveal that, overall, countries perform better with respect to formal recognition of land rights under customary tenure systems (as shown in the first two indicators of Table 1, with “A” or “B” scores predominating across the 10 countries under study) but struggle more with regulatory reforms that specifically target women (shown by the predominance of scores “C” or “D” for last three indicators).

The prohibitively high costs associated with formalization (documentation) of land rights—either during first-time registration/documentation, or the costs of updating records during land transfers (in the form of inheritance/gift or sale) also contribute to the further marginalization of women. Most of these processes lack transparency and operate in a top-down manner, meaning that vulnerable groups such as women run a higher risk of incurring informal costs (i.e., bribes). Such scenarios occur routinely in almost all the 10 countries (as shown in Table 2 below) making the formal and informal costs associated with land rights formalization prohibitively high—except for Ethiopia and Rwanda, respectively.

Second, the lack of proper implementation and enforcement mechanisms undermines the reforms’ potential positive social and economic outcomes. Particularly in Africa south of the Sahara, implementation and enforcement often do not follow from some new law or other change. No matter how comprehensive the legal and institutional framework, women end up facing continuing discrimination at various stages of the implementation process and afterward. Diagnostic cross-country analysis shows that potential impediments to proper enforcement and implementations of land reforms include (but are not limited to) lack of capacity (financial and technical), corruption (rent-seeking behavior), and social practices in customary laws that favor men.

The other factor undermining the position of women in Africa vis-à-vis land is the erosion of land rights protection under the customary tenure system due to ongoing social and economic transformation. Cross-country empirical findings show that increasing population pressure, commodification of land (the emergence of land markets), and agricultural commercialization—all of which ultimately increase land values—contribute to the erosion of land rights overall, and particularly women’s land rights.

These trends raise questions about the suitability of the status quo (customary) tenure system as a bulwark for protecting women’s land rights. They demand that government interventions be sensitive to local context and tailored to incorporate gender considerations. Although customary land tenure arrangements across Africa south of the Sahara may have served women relatively well in circumstances where land is deemed abundant, less commodified, and farming subsistence-oriented and less commercial (Ghebru and Lambrecht 2017; Ghebru and Girmachew 2017, 2019), adjustments and reforms are needed to meet the new demands being put on land by rising populations, migration, public and private agricultural investment, and a global rush for commercial farming land.

Hosaena Ghebru is a Research Fellow with IFPRI's Development Strategy and Governance Division, based in Addis Ababa, Ethiopia.