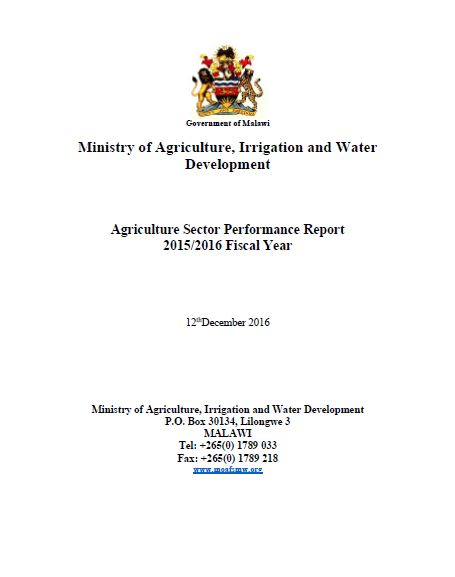 The 2016 Joint Sector Review report has been prepared against the background of four key national developments relating to the ASWAp implementation, finalization of the development of the National Agricultural Policy, climate change induced humanitarian crisis involving 6.7 million people, and continued volatile macro-economic conditions that have significant bearing on the sector’s investments. The ASWAp which has guided the sector’s investments during the past four years came to an end in 2014/15 and steps to develop a successor investment plan are underway to be guided by the just finalized National Agriculture Policy. The development of the new national investment plan will also be informed by the lessons from the worst ever food insecurity crisis owing to two consecutive seasons of poor climatic conditions. The continued volatile macroeconomic conditions that impact on the sector’s investment efforts also add to the calls for allocative efficiency in the use of the sector’s investment resources for it to effectively contribute to the national growth and developmental aspirations. This report content is largely informed by insights obtained from the review of government policy and strategic documents but also supported by insights from empirical analyses.

Ministry of Agriculture, Irrigation and Water Development of Malawi