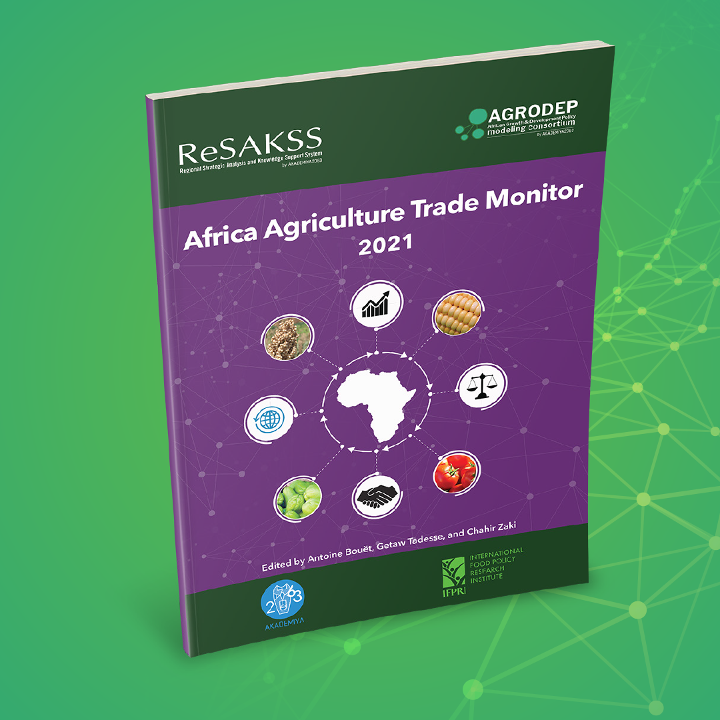 After the short brief, she invited Dr. Godfrey Bahiigwa, Director, Agriculture & Rural Economy and Agriculture, African Union Commission, Ethiopia, to give his opening remarks. In his statement he noted,

“There is need for better trade data to support AFCTA agenda and to combat the adverse effects of COVID-19 pandemic. The AATM report addresses challenges in African agriculture trade, and provides findings and opportunities for intra-trade activities.”

Another key opening remark was given by Dr. James Oehmke, Acting Division Chief, Bureau for Resilience and Food Security, U.S. Agency for International Development (USAID). He said that USAID welcomes and supports the AFCTA to significantly boost intra-African trade, the launch of the AATM is extremely timely to inform the growth of the continent in addressing key challenges.”

The baton was passed to Dr. Ousmane Badiane, Executive Chairperson, AKADEMIYA 2063, Senegal, who gave highlights of the report touching keenly on various points, such as: Africa’s position in global markets, competitiveness in African exports, diversification of traded products, degree of value addition in traded goods and answering if COVID-19 has affected trade.

Key pointers indicated that exports have been dominated by cocoa, tobacco, coffee and seed oil, hence the need to be boosted.

“Trade in African markets is getting more competitive, especially around processed goods. There is also diversification and sophistication of Africa exports, although we have only managed a few higher value goods,” he said.

In his presentation he also noted that Intra-African trade was highest in 2013 but the trend dropped greatly in the following years to date, hence still operating below potential. He warned, 50% of countries have closed their borders and this has greatly impacted trade, and advised that removing border restrictions should be removed to grow.

Next to speak was Vanessa Adams, VP Strategic Partnerships and COP PIATA at AGRA— Alliance for a Green Revolution in Africa, who stated that there is an ability for coalition of the willing in Africa on the ACFTA and there are great efforts in addressing barriers to trade and greenline procedures.

“We continue to be optimistic in AGRA and I encourage more sharing of realtime data,” she said. In completing her remarks she went on to appreciate the efforts of all partners who took part in this initiative and declared the AATM report officially launched.

There were reactions and additions from key panelists, such as Antoine Kajangwe, Ministry of Trade and Investments, Rwanda, whom, in giving a country example, said: “In Rwanda, we are seeing more exports on flowers, fruits, and maize, among other agricultural products. Majority of trade is on the border between Rwanda and the DRC, where 90,000 informal traders engage in trade in agricultural commodities; the majority of these are women, at 74%.”

Representing the African Continental Free Trade Area was Peter Joy Sewornoo of AFCTA Secretariat, who said: “The AfCFTA has 44 country members who signed the agreement. In January 2021, we started trading and we have signed on 28 tariffs so far, out of the rendered 42. We are at 86% of agreed goods of quality.”

Adding on was Dr. Maximo Torero Cullen, Chief Economist, Food and Agriculture Organization of the United Nations, Italy, who indicated that there is a huge window to increase and improve the level of exports. He reminded everyone that the value of agri-food declined from 4% in 2011 to around 1.7% in 2017, which indicates a big problem.

“Intra-regional trade needs to be accelerated by various actions among them providing value block chains and also improving on quality of food,” he said.

This blog was first published on The AGRF website here