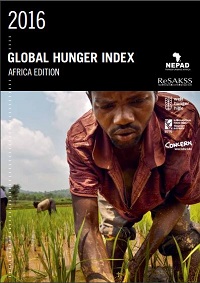 The 2016 Global Hunger Index Africa Edition is produced by the International Food Policy Research Institute (IFPRI), Concern Worldwide, and Welthungerhilfe in conjunction with NEPAD. The GHI Africa Edition is based on data taken from the 2016 Global Hunger Index. IFPRI has calculated the Global Hunger Index, a multidimensional measure of global hunger, for the past eleven years. The series tracks the state of hunger across the globe and spotlights those regions and countries where action to address hunger is most urgently needed. The GHI Africa Edition shows that although progress between countries varies, the level of hunger in all countries across the continent of Africa, for which GHI scores could be calculated, has declined since 2000. Despite this progress, the level of hunger in many countries remains unacceptably high. Of the 42 countries in Africa for which GHI scores could be calculated in this report, only three countries have scores that fall into the “low” hunger category, while 28 fall into the “serious” category and five countries have 2016 scores in the “alarming” category. It is clear that governments must now follow through on their promises with political will and commitment to action that is both strong and sustained. The root causes of hunger are complex and require multi-sectoral and multilevel collaboration. The role of national governments in achieving these goals by significantly enhancing the quality of implementation is also clear. Yet Zero Hunger can only be achieved when governments measure progress and are accountable to citizens, which requires capacities to collect and analyze data, combined with open and comprehensive review and dialogue processes. The biennial review process established under Malabo and the support to inclusive Joint Sector Review (JSR) processes under CAADP are critical building blocks in this regard.